Before 1956, our captains were already in the position working on board the merchant vessel since 1928, by that time, there were some associations exist: Association of Navigator of China Merchant Vessel (ANCMV); China Seaman’s Club (ASC); Association of Radio Operator (ARO), with association’s name but actually was in union purpose. After Second World War, Government merged ANCMV and ARO to The name “Association of Officers of China Merchant Vessel” in Shanghai. After the government was withdrawn to Taiwan on 1949, they refused complicate and rejected captains’ leaving for another association, although in international environment, most adopted the logic: Labour is different with Owner, Captain is somewhat an Ownership’s position.

This Association was under progressed at 20th of December in 1957. Back in 1956, the action which became a exclude association was raised by Captain Y. J. Sa (沙允仁); Captain S. Y. Gou (顧錫元) and other 56 Captains who working on merchant vessel, basic on the logic state above. For year’s effort, Government finally approved and set up this association at 27th of April of 1958.

At that time, most of associations were in union’s or club’s type for recreation and communication purposes. But our Association wished to become a professional one. Hence, in the year of 1961, the Chairman of second session, Captain H. J. Yao (姚煥銳) ever working to refresh the purpose before the government’s monitoring system.

After 14 times of discussion with Ministry of Transportation and Communication, finally we completed the revised draft on Dec 22, 1959. Wish the Ministry of Interior’s approval.

After few years efforts, until Jun 6, 1961, this association got the permission from Government, finally became a specialty association under Ministry of the Interior and Ministry of Transport and Communication. This were the victory of Association and all members.

Except the members of Association, we special appreciate who give assist:

First meeting at first session on the date 7th of May in 1958, at the International Hotel in Si-ning South Road, Taipei. Chairman and committee were elected:

Also, decided to have a publication for each quarter, hence set up an edit committee for Master News-report.

Association fixed the address at #1, 1743 Lane, Chung Chen Road Taipei on Oct. 10, 1958. After the approval by Ministry of Transportation and communication; Ministry of Interior and KMT China Marine Seaman’s Section. Association was on the road officially.

At beginning, we have 90 members in the list. Due to reasons, only 25 make officially enlist, but after one year later, while members finished their contract, and completed the procedure, the total members reached the figure of 138.

The Second Assembly of first session was held on April 5, 1959 at No. 155 Si-ning South Rd. Citizen activity center. Several decisions were made, the important issue was trying to refresh the Union type to Specialty type. Request was sent to the Ministry of Interior for approval.

When the third Assembly was opened on Apr 24, 1960, 91 members attending the meeting, plus 20 representatives from Government and other parties.

Chairman and executive committee of second session were elected:

   Convention on the International Regulations for Preventing Collisions at sea 1972 (Translation from English to Mandarin), 2010

   International Cod of Signal (Translation from English to Mandarin), 1981

l   Routine survey onto cases of marine accident every year from Marine Court and Administration of Transportation and Communication.

l   The study of “Accident prevention for sand carrier” 2003

l   On-board training record book for each grade since 2006

Over 15,000 person-order were trained by this training center. 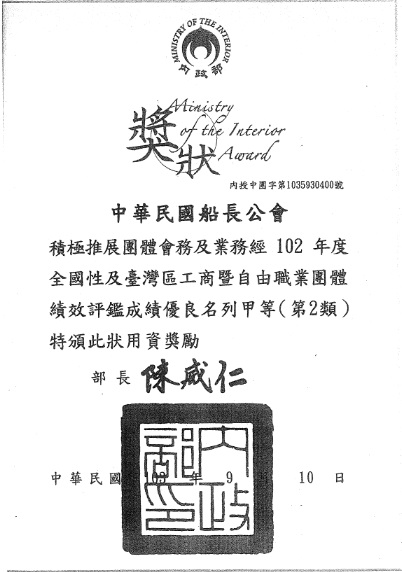